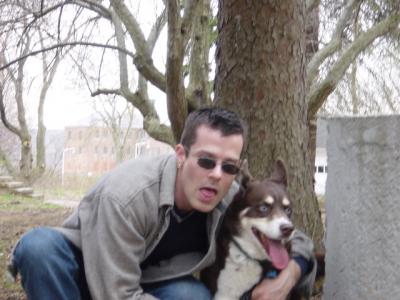 I had too much computer. And a bad case of quaint.

Such as it was, time stood still and there I was with someone seemed half my age and less a quarter my hygiene. We walked to Emily Dickinson’s grave. We held hands; he said his fingers were empurpled from picking kale in deep frost. I found that twee. In an adorable way.

Tell us about one of the first pieces you wrote.
The first prose poems I wrote were in high school. I wrote this epic fantasia called “Bidet and the Giant Silver Rocking Horse.” It involved pretending to be on acid, which at the time I had not tried. The work was finding a way to open up and develop momentum, which is what I love best about prose poems. Snag on something, unravel the whole sweater. For me, this is the supremest form of fun.

What writer(s) or works have influenced the way you write now?
Marianne Moore is my biggest influence, I suspect. For sonorousness I like Nietzsche and Kafka. For intelligence, Plath. My friend Elizabeth Willis has this terrific book, Turneresque, which really impressed me with what prose poetry could do. That book set my present practice spinning.

What other professions have you worked in?
I trained to be an archivist, a job to which I am allergic. I was a lifeguard. I was a legal secretary. I think teaching is my favorite money-bearing activity and the one I’m best at.

What inspired you to write this piece?
“A crumbling infrastructure” was written about a time when I was newly single and newly 40 and living in the Pelham woods. There was this site, Manhunt, which around 2009 served the purpose of Grindr but also connected gay friends in the Pioneer Valley. Not having been single for most of my adult life, it was a revelation. Sex is, of course, rather terrifying. Other people are, however, completely interesting. “Goat boy” of the poem worked in a butterfly conservatory—what could be better than that? He was incredibly sweet and beautiful and really loved marijuana– also he had dreadlocks.  The spur of the poem was remembering how foggy everything looked through dread-musk smeared glasses. The idea of dread-musk.

Is there a city or place, real or imagined, that influences your writing?
Montreal is a central character in my first book EXCITEMENT TAX, while our emigrating from the US to Canada in 2011 is the plot. What more could a writer wish for than a city where language is everywhere activated and living, full of conflict and full of fun? And also where the people are very sexy and very well-dressed.

Do you have any rituals or traditions that you do in order to write?
I rely on an increasingly intricate system of notebooks. One by the bed, one on the desk, loose leaf for composing. I’ve also taken to using my phone, which I then have to transfer to paper to make it back into language.  I jot constantly (things I hear, things I think) and compose in the afternoon, when not feeling defeated by daily living.

The present poems are hewn from giant masses of prose. Kind of like sculpture. I write and write this id junk and then see what shapes are in it. Then carve. The carving is the work, the junk-spewing is the fun part.

Though I’m a little embarrassed by it, I like to have “Alex,” the computer voice, read my poems back to me over and over while I work on revisions.

If you could work in another art form what would it be?
Film.  Specifically shot-by-shot remakes of Doctor Strangelove.

What are you working on currently?
Working toward another collection of prose poems called The Playfulness of Skeletons, the Sadness of Bones.

Meanwhile I have an essay to finish on this cool little prose poem by Elizabeth Bishop about a cruisy gay toll-taker on the Bay Bridge.

I’m also discovering that having a first book is a lot of work. I’m not really good at any of it, nor natural to it. The idea of showing up at all is a bit uncomfortable. It’s kind of funny doing this first book thing at my age. Getting to feel that awkwardness, however, might be the best thing about it. I feel like I’m learning something about middle age that is actually nice to know. That I like a good awkwardness.

What are you reading right now?
Popular Delusions and the Madness of Crowds and The Flowers of Evil. Also really savoring my friend Gillian Sze’s book Panicle.